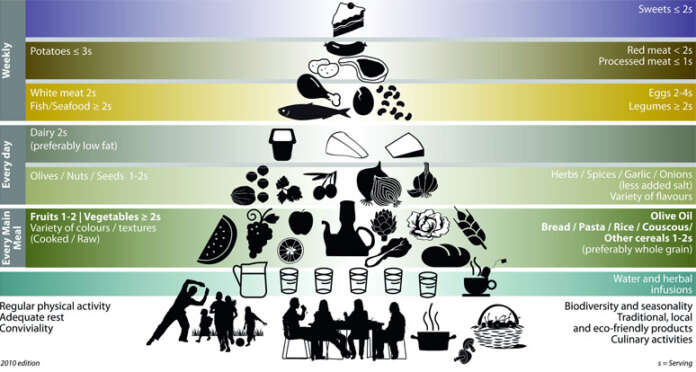 The new model takes into account qualitative and quantitative elements for the selection of foods
The traditional Mediterranean Diet MD pyramid has been updated to adapt to todayrsquos way of life As an initiative of the Mediterranean Diet Foundation and with the collaboration of numerous international entities, a wide range of experts in nutrition, anthropology, sociology and agriculture have reached a consensus in a new richer design incorporating qualitative elements

The new pyramid follows the previous pattern at the base, foods that should sustain the diet, and at the upper levels, foods to be eaten in moderate amounts Moreover, social and cultural elements characteristic of the Mediterranean way of life are incorporated in the graphic design It is not just about prioritizing some food groups from others, but also paying attention to the way of selecting, cooking and eating It also reflects the composition and number of servings of main meals

The health benefits of the Mediterranean Diet and its protective effect against chronic diseases has been well established by the scientific community This new pyramid includes all the food groups it is in the proportions and the frequencies that relies a healthy or unhealthy diet This food consumption pattern is addressed to a healthy adult population and should be adapted to the specific needs of children, pregnant women and other health conditions

This pyramid is a result of international consensus and is based on the latest scientific evidence in the of health and nutrition published in hundreds of scientific articles in the last decades, thus contributing to the harmonization of educational tools used in the promotion of the Mediterranean Diet and responds to the need for a common framework among Mediterranean countries The use and promotion of this pyramid is recommended without any restrictions and has been translated and is available in Spanish, Catalan, Galician, Euskera, French, Arabic, Italian, Portuguese and Greek The 10 versions of the pyramid can be downloaded from the FDM website, wwwfdmedorg

About Us
Olivenews.gr is a specialized news portal that deals with the primary sector and especially with the olive and its derivatives.
Contact: info@olivenews.gr
Tel.: 210 3210621
Follow us on Social Media
Useful links minagric.gr
© Olivenews.gr
ΠΕΡΙΣΣΟΤΕΡΑ ΘΕΜΑΤΑ